While traveling to Syria to interview Iraqi refugees, Kim Schultz never expected to fall in love with one.

But that is exactly what happened.

THREE DAYS IN DAMASCUS (Palewell Press, 2016) is a recently released memoir about Kim’s 3-year fight for the man she loved through a war, refugee crisis and even an arranged marriage.

The event will include a live reading from the author, book signing and Q&A, as well as additional special guests reading Human Rights poetry and a speaker from SYRIA RELIEF.

Entry is £5 in aid of Syria Relief (concessions £3)

With roughly 65 million refugees worldwide including approximately five million Iraqis displaced from their homes since the U.S. led invasion, this urgent, moving and often humorous memoir examines the lives of dozens of Iraqi refugees, including one named Omar, trying desperately to survive in a world blind to their plight.

Breaking assumptions, stereotypes and expectations, the author fights for Omar in a whirlwind Middle Eastern romance and subsequent three-year intercontinental, internet relationship in the shadow of a revolution.

THREE DAYS IN DAMASCUS is the story of an American woman and an Iraqi man, of an epic journey to safety. It’s a story of culture, devastation, redemption and hope…a story that isn’t supposed to be a love story. 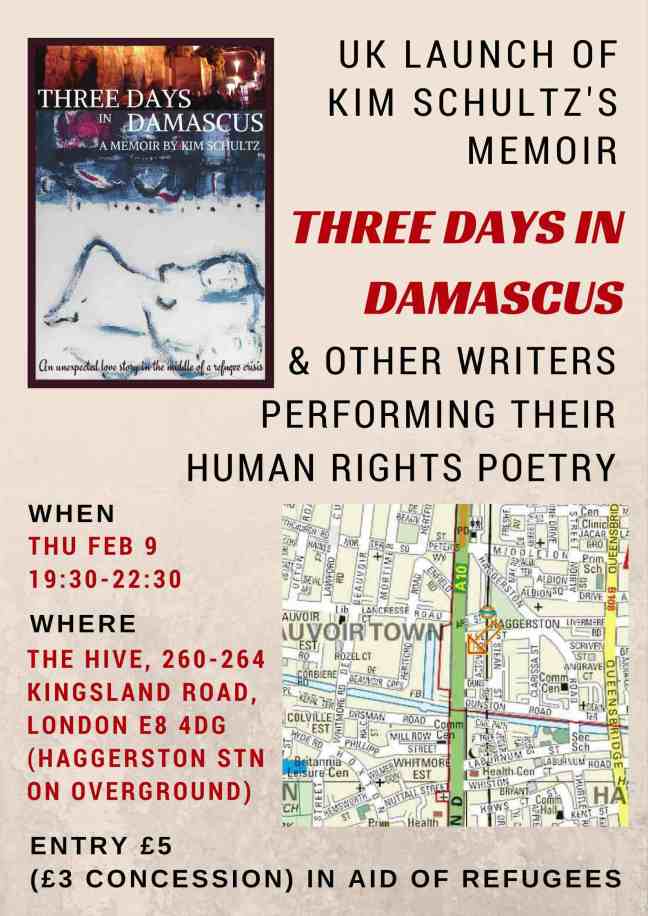